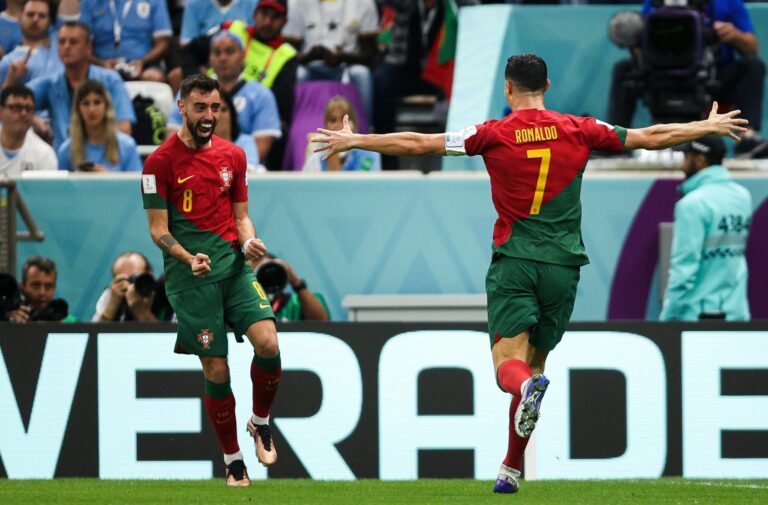 After Cristiano Ronaldo’s 2022 World Cup came to a disappointing end against Morocco, the tournament served as yet another reminder that the 37-year-old has still got it.

With a record 196 international caps to his name, here are Ronaldo’s best goals in a Portugal shirt.

It would be difficult to create a list of Ronaldo’s most impressive goals without mentioning a free-kick. The 2018 World Cup hosted a crunch opening match between Portugal and Spain in Group B, and the Selecao dos Quinas found themselves 3-2 down with minutes remaining. This was despite Ronaldo’s best efforts, as he had already struck twice to keep his side in the game. Then, in the 88th minute, CR7 stepped up to strike a blistering free-kick into the top corner past David De Gea, to level the scores and ensure Portugal didn’t get off to a losing start.

Spain avoided the same fate in some style in Qatar 2022, with their 7-0 victory over Costa Rica making them many pundits’ World Cup tips to go far in the competition. However, they were unceremoniously beaten by Morocco in the round of 16, who then went on to defeat Ronaldo and co. 1-0 in the quarter-final stage. As a result, some World Cup tips point towards Morocco boss Walid Regragui being named manager of the tournament, as their second European scalp meant Ronaldo now has to watch on from the sidelines.

Ronaldo scored a very different kind of goal in the 2016 European Championships. Despite Portugal going on to victory in France, it is easy to forget that Fernando Santos’ side failed to win a single group match, eventually qualifying third from Group F with three draws to their name. The last of these points was shared with Hungary, in another six-goal thriller where CR7 got on the scoresheet in some style.

The Selecao’s number 9 bagged a brace that day, which included an audacious back-heel flick that caught goalkeeper Gabor Kiraly off guard, showcasing a sublime piece of skill and ingenuity. That goal set up a path to glory after the group that wasn’t easy, with a narrow 1-0 victory after extra time in the last-16 against Croatia followed by a win on penalties against Poland in the quarter-finals. Ronaldo opened the scoring in the semi-finals against Wales in a more routine 2-0 win, before famously coming off injured in the final and managing from the touchline as a 109th-minute Eder strike was enough to see off the hosts France 1-0.

This is the only entry on this list not to come from a major tournament, as Portugal very nearly slipped up against bottom-placed Armenia in European Championship Qualifying Group I. Once again, Ronaldo bagged himself a hat-trick with several fine goals that could have been included on this list. The first was an example of coolness under pressure, sending goalkeeper Roman Berezovskiy the wrong way from the penalty spot, before capitalising on a mix-up at the back to make it 2-1 just after half-time.

However, it was CR7’s third goal which makes it onto this list, both for crowning an impressive hat trick and for the ferocity of the strike. Picking the ball up from yards outside the box, Ronaldo hit a cannonball from long-range which flew into the goalkeeper’s top left-hand corner. It was yet another example of how he is capable of turning a game on its head, with the keeper left with no chance as Ronaldo proved his quality from long range once again. His individual brilliance led Portugal to top their qualifying group with seven wins from eight matches, for a tournament in 2016 that the Selecao dos Quinas eventually won.

Despite Ronaldo showcasing time and time again his supreme qualities for the national team, his future at club level remains up in the air. What is certain is that these three strikes show how he will continue to be an asset despite his experienced age, wherever his next destination turns out to be.