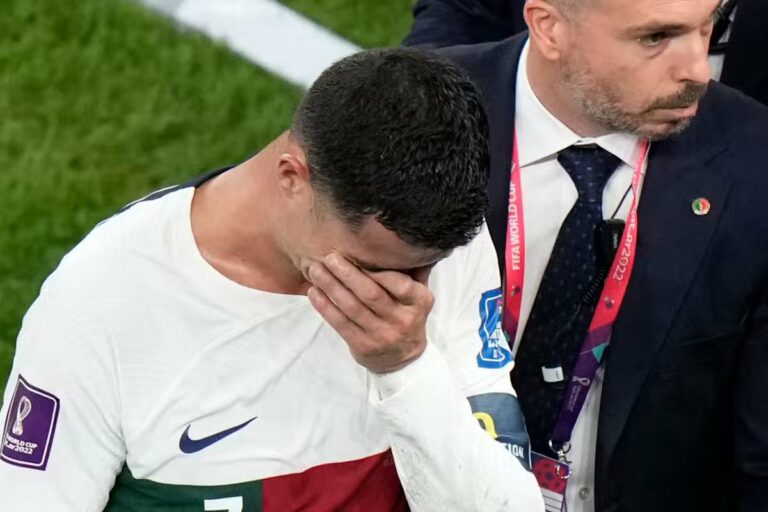 The final straw was soon to come as Ronaldo held a very explosive and unorthodox interview with Piers Morgan, and even his biggest fans would happily acknowledge the interview was designed to achieve only one outcome – the cancellation of his existing contract. United agreed to just that after he criticised managers, fellow team mates and even the club owners and with his club contract terminated, he was free to focus on what many expect will be his last World Cup Finals appearance.

Portugal progressed through their Group H battle as group winners with two wins and a defeat, and they took a cracking 6-1 victory over Switzerland at the Last 16 phase. Despite probably not getting the game time he would have expected, Ronaldo’s World Cup dream came to an end at the Quarter Final stage as Morocco pulled off a shock and unexpected victory, leaving a clearly emotional Ronaldo to simply now ponder what turn his career would take.

Following his departure from United, Saudi Arabian side Al-Nassr have been heavily linked with being interested in his services, and it was earlier reported that they had been the only club so far to actually put an offer on the table – but they understood there would be no response until Ronaldo’s attentions were no longer on Portugal’s campaign out in Qatar.

Following Portugal’s exit, speculation has once again increased on what the future holds for the 37 year old, and recent reports from Spain suggest he is on the verge of agreeing a mixed seven year contract with Al-Nassr that could amount to a whopping £175 million a year deal with them.

The deal is said to come in two parts, firstly as a player on a two and a half year deal, before then taking on a paid ambassadorial role, which could well see his payment increase further as time goes by. Part of the proposed ambassadorial role with be state sponsored by Saudi Arabia as it is expected he will also be expected to help promote the candidacy of the Arab countries bid, jointly with Egypt and Greece, to host the coming 2030 World Cup.

It is not the first time Al-Nassr have chased his services, as in his interview he admitted there was a Saudi Arabian club in for him during the summer, but that deal obviously never came to fruition.

The move would mark an end to his glittering top flight playing career, but if there was any doubt that his financial future was sorted, this contract would more than answer that particular question.